Sliver Queen EDH Deck – How About a Nice Game of Chess?

So in the follow up to my first article, which discussed my philosophy towards Commander, I wanted to talk about my very first EDH deck that I built and how it stands in its current form, to show that philosophy in practice, as well as look at some of the major changes this deck has gone through in its life, and why those came about.

First off here is the decklist:

So it’s quite clear from this decklist that the deck is a tokens deck, designed to get a large number of tokens out, and allow these numbers to grow in a number of ways. There are no odd win conditions in this deck, it is simply here to beat face, with as many tokens as it can generate, be they large or small. The deck has some obvious weaknesses, such as its vulnerability to mass removal, but gambles on being able to get a large enough number of creatures out to dodge some of these. It is by no means perfectly tuned, but it can be very effective and has been a blast to play every time I have run it.

So the deck has a number of ways to boost the amount of mana that it generates, as you would expect from a G/W list. Selesnya Keyrune & Selesnya Signet are the most obvious ways that this deck ramps, being handy mana rocks. In amongst the artifacts, Druidic Satchel also plays a role in that it allows me to play an extra land each turn if I hit one.

Creatures play their part in ramping this deck out both directly and indirectly: first of all there is Avacyn’s Pilgrim and Courser of Kruphix which directly either increase my mana creation, or increase my chances of hitting my land drops. In less direct fashion there is Seedborn Muse which gives me mana in my opponent’s turns, allowing me to use abilities of my creatures or play instants. This is very handy in the case of Rhys the Redeemed as he can double my tokens in each turn! The final creature ramping card is Karametra, God of Harvests: this means that every creature spell i play fetches me a basic land. Sadly this doesn’t count creature tokens, but is still enough to give me a prodigious amount of land if played early enough.

In the enchantments there is one card which has a huge effect on mana ramp, namely Mirari’s Wake: this is without doubt my favourite card of all time in Magic! Here it allows an effective doubling of all mana production from lands, as well as serving to pump creatures power and toughness, all in a difficult to remove fashion.

As this is the main focus of the deck, I won’t go on to list every way it gets tokens out, I’ll just go over the highlights. The deck contains 36 cards that directly create tokens through one method or another, including our Commander. This means that we are highly likely to have tokens on the table from pretty early on, especially as we can play our Commander on turn 1 should we chose, and create tokens as early as turn 2. Some of the best token producers are those that make them for free, such as Rampaging Baloths or Avenger of Zendikar; these two cards give you tokens simply for playing lands. Similarly, Primeval Bounty gives a similar reward for playing creatures. Giant Adephage gives a copy of itself just for doing combat damage to an opponent, and due to its size and having Trample, this means it can do damage with relative ease.

Once we have tokens on the board, then the real fun begins with this deck. Getting Parallel Lives into play means that every time we would get a token, we get twice as many. Generating 2 tokens? Get 4. 10? get 20! This sounds a bit like magical Christmas land, but with cards like Trostani’s Summoner or Devout Invocation it is pretty easy to start getting more than one token at a time. To further this strategy, the Commander for the deck Rhys the Redeemed can tap to double the tokens already on the board: with Parallel Lives in play this then doubles again. It very quickly gets out of hand!

To enhance the token production, this deck makes strong use of the Selesnya mechanic from Return to Ravnica block: Populate. It contains 11 cards that have this mechanic on them, meaning that increasing the army of tokens on the board is quite straightforward, especially as a number of these cards have it as a repeatable effect.

As this deck has a large number of small creatures, ways to boost the power and toughness of these creatures are really important. As this is a G/W deck there are a good number of ways to achieve this effect, and this deck contains 6 cards with this effect. 3 of these cards apply to tokens only: Phantom General, Leyline of the Meek, & Intangible Virtue. The other three effects all add to every creature, with the original Glorious Anthem, Mirari’s Wake, and the frightening Collective Blessing. It is a little bit living in the clouds to dream of getting them all out, but even a couple of them make an unimpressive 1/1 token into a 3/3. These can turn an army of small creatures into game winners.

Removal is important in all decks, and so this deck has cards that deal with certain threats. It doesn’t have any mass removal, which is one weakness of the deck currently, but it does have a number of spot removal cards. 5 cards cover creature exile, creature destruction, and enchantment/artifact removal. One of these cards isn’t strictly removel (Hornet Queen) but it’s tokens can act as creature removal. Selesnya Charm can exile a powerful creature, Trostani’s Judgment exiles any creature, and Oblivion Ring answers any permanent on the board. To back this up, Sundering Growth destroys any artifact or enchantment, whilst populating too.

So now that we have had a look at a number of things this deck does, it is worth looking at how this deck fits my general philosophy, and also what areas this deck is weak in. I built this deck to focus on tokens, and thus winning by using that particular subset of cards. With this in mind I made a conscious decision to avoid too many artifacts, hence the lack of Sol Ring, Sensei’s Divining Top, or any of the equipment that gives hexproof to a creature. This was all to make room for as many of the cards I wanted in the deck. I also wanted to try and make this deck competitive in my local meta without adding those cards, and I wanted this deck to be fun to play and play against. I can certainly say it’s fun to play, but it’s more difficult to say how much fun it is to face. However, it does help that no one has refused to play me yet, and it does have a decent win percentage.

There are some obvious weaknesses in this deck, both in cards it could include and effects it is weak against. There is no mass removal in this deck, despite being in white, and this is one area that I think I might change in the future. A Wrath of God or even a Mass Calcify would allow this deck to deal with an opposing force better. This deck also lacks any way to recur cards from the graveyard, which considering it is green is unusual. This is something of a conscious decision, as a considerable number of creatures in this deck are tokens, and recursion doesn’t help too much there. There again, if I added the right kind of recursion, then I could get the token spells back…

This deck doesn’t have too many ways to deal with mass removal, with one solitary card providing Indestructible to all creatures (Rootborn Defenses), and anything that bounces my whole team really makes a mess of this deck, meaning that timing attacks is really important. The lack of defense for the general can be something of a weakness. He is cheap to summon and so not too difficult to get back out, but this can add up quickly if he gets removed too often. This is something that I could rectify should I ever find it too oppressive in my local meta. I previously used to use Emmara Tandris as my general, as her ability to prevent damage to tokens was useful in combat, and meant they could dodge mass damage based removal. However, she was very expensive, and getting her out more than once was difficult. What is more, the ability is actually pretty weak, as it does not stop mass removal and she has no way to protect herself. I soldiered on with Emmara for 8 or so months, but eventually replaced her with Rhys the Redeemed, as he is just better all round.

So this is my first deck. What do you think? Good? Bad? How would this do in your local meta? Let me know in the comments below. 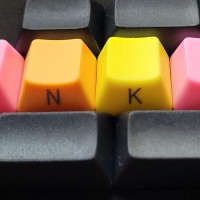 I'm a longtime casual player of MtG, having started way back in 1997, and dropping in and out a few times ever since. I played for a good while during Onslaught and Mirrodin blocks, dropped at Kamigawa and came back this time round for Gatecrash. It is around this point that I discovered Commander (EDH), and I now almost exclusively build and play Commander decks, hitting the 20+ deck mark earlier this year... I think I might have an addiction.